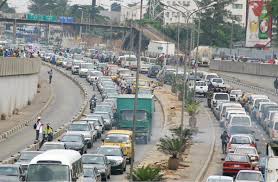 Respect is defined as a feeling of deep admiration for someone or something elicited by their abilities, qualities, or achievements while fear is an unpleasant emotion caused by the threat of danger, pain, or harm.
Wonder why I’m defining respect and fear? its because these two words put together define hierarchy on Lagos roads.
A video recently surfaced online of a Nigerian actress ‘crazing’ for a police convoy that hit her car. Apparently not done with that, the policemen proceeded to beat her up. Unfortunately, this situation involving the actress is what we face daily on Lagos roads. One would do well to recognize that there exists a hierarchy on Lagos roads. At the top you have any vehicle with siren (even ambulances). Followed by the private car owners, then the Danfo drivers, keke drivers, okada riders and bicycle riders in that order. At the bottom of the list, you have the unfortunate pedestrian.
No one needs to tell you that once you hear the siren, even before you see the vehicle, abeg leave the road. Don’t you notice how cars that are in traffic part like the red sea once they hear the sirens.
‘My car’ as private car owners are popularly referred to don’t generally get the same treatment as cars with sirens, but you can be rest assured that no Danfo would want to mess with you by bashing your car. They can only do shakara as they know deep down in their hearts that they don’t have the money to fix ‘my car’ so they grant you an almost safe passage.
Danfo drivers have the one distinction of being as the worst drivers on planet earth as they can practically make kekes disappear off the roads. Its like magic, they flex their power and muscles on the site of an harmless tricycle as they also want to show that ‘them self senior person’
Kekes are the tricycles on Lagos roads that mistake themselves for motorcycles because the way they maneuver in spaces that cannot even accommodate a ladder. They seem to think they can shrink and increase their size at will depending on the situation they find themselves in. They in turn curse and even oppress the poor motorcycle riders
Motorcycle aka Okada riders are the worst, they seem to be on some sort of high and adrenaline rush. There also seems to be some competition amongst them on who would get to heaven or hell the fastest. I doubt this people get any training on how to operate this machine they just hop on one and off they ride into sunset trying to kill common bicycle riders.
If you thought bicycle riders where at the bottom of this chain well sorry, you got it all wrong because while getting oppressed, they vent their anger on the pedestrians.
We pedestrians are the ones on the bottom of the food chain. God help us from these other crazies.

NOTE: Dangote, Fuel and 911 trucks are on their own lane and are the kings of the road because we’ve all seen some unpleasant situations involving them, like this one. 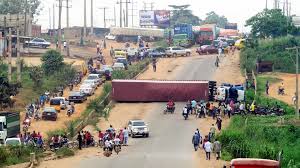